New News
New News is a literary and performance series for new work or older work in a new context.

Barbara Browning reads a section from her book, "The Correspondence Artist."

Ben Mirov reads some poems, including poems from his chapbook, "I is to Vorticism"

Brad Kokay finishes his live painting and discusses the process.

Here are some photos and a link to the Trillionaire Brothers video "A Day in the Life"!

Derivative Source:  New News #2's theme in June sought to discover the new in derived works, works created in response to original sources, or works that have informed or contributed to derivations.  As always, the theme is a prompt and is open to interpretation by the artists themselves.
Ben Mirov
Ben has writing in, or forthcoming from: Did I Shit Me (I & II), The Agriculture Reader, Lungfull!, Absent, Verse Daily, The Best American Poetry Blog, Noo Journal, We Are Champion and Sixth Finch. He is the author of Collected Ghost (H_NGM_N, 2009), I is to Vorticism (New Michigan Press, 2010) and Ghost Machine (Caketrain Press, 2010). He is general editor of pax . He is also poetry editor of LIT Magazine. He blogs at isaghost.blogspot.com.
Martin Rock
Martin is a graduate of 's MFA program, where he was a recipient of the St. Marys and Starworks fellowships. His poems appear or are forthcoming in Diagram, Sixth Finch, Tuesday; an Art Project, Mississippi Review Online, At-Large Magazine, and others. His collaborative chapbook, Fish, You Bird was published this year by Pilot Books and is available at www.pilotpoetry.com. In his free time he translates Japanese poetry, breathes underwater, and plays on mountains.
Brigid Ochshorn
Brigid goes by the alias of Ant Parade on musical occasions, and helps to promote and support local artists by combining the forces of radio hub WMNF 88.5 fm and Cafe Hey downtown in a local monthly music series. She is also a writer of poetry, comedy, non-fiction, and other tales.
S2K
S2K likes to mess around with things that can be heard, felt and seen, even when people directly tell him to stop.  He lives pretty close to the Jan Platt Library, in , and hopes to have something to share at this event when the time comes.
Bradley Kokay
Brad is an artist who works in a number of mediums, utilizing the performative element of painting as one of them.  He has a BFA from USF and got an A on his art thesis.  His work can be seen at Electric Voodoo Tattoos in St. Pete, and he will take part in an upcoming group show at Cafe @ . in on .
Trillionaire Brothers (Nathan Fernandez, David Fernandez, Ben Wax, Teresa Lamb)
The Trillionaire Brothers are an inevitable product of crossing the Millionaire Mom with the Mega-Dad.  They ironically consist of three boys and a girl, only two of whom are actual blood relatives. Scientifically proven to be the trillest thing ever created, they strive to produce content that they find interesting, and the heck with the rest of you.
Barbara Browning
Barbara teaches in the Department of Performance Studies at of the Arts, NYU. She is the author of two academic books, and her novel, The Correspondence Artist, is coming out in February. She also writes poetry and posts chamber choreographies on YouTube:  http://www.youtube.com/barbarabrowning
Minna Harri
Minna is a choreographer currently based in . She has lived in and is originally from . In addition to studies in ballet, Butoh, contemporary modern dance techniques, flamenco, tango, and singing, she has studied Performance and Theory in the .  She graduated with an MFA in 2006. MFA in 2006.  Her projects include choreographies, installations, performances, and essays.  More information on her work can be found here:  http://minnaharrichoreography.blogspot.com/
Autumn Widdoes
Her play “” is situated in a call center and explores the lives of two early 30-something co-workers as they deal with life and the effects of working in a corporate culture.
Sahar Zahra Faghih is an actress.  She is playing the role of Worker A. in "Lame City."
By day she is also a Pediatrician and recently finished her residency at USF.
Posted by New News at 11:16 PM No comments: 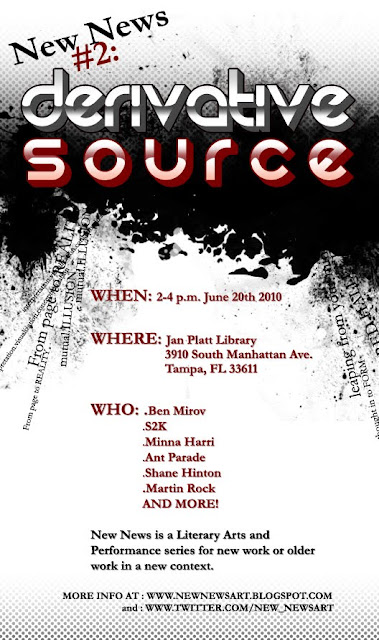 Flyer created by Jason Barker
Posted by New News at 7:44 PM No comments:


The original video created by Shane Hinton and Mez Breeze via their Google Wave collaborations can be found here: